Yesterday afternoon I was forwarded this questionnaire by a colleague in another province. 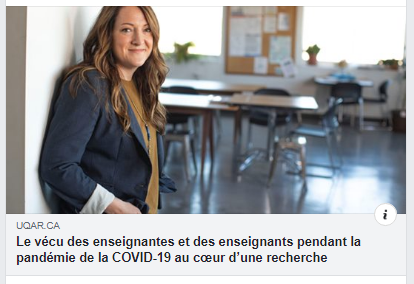 English translation of headline: Teachers’ experiences during the COVID-19 pandemic at the heart of research

I was attracted by the headline because I thought it was important to gather this kind of data. But when I went to fill out the questionnaire, I realized that, though I teach in the public system in Quebec, my experience didn’t matter.

The questionnaire was developed by Catherine Beaudry, a researcher from UQAR who is doing a province-wide poll of teachers to find out the impacts of the coronavirus and subsequent government management of it on their practice. But the province-wide poll is limited to teachers in the French sector (Quebec’s public education system is divided along linguistic lines – French and English). So I wrote to her and asked why. I also asked if she was worried about painting an incomplete picture by excluding the anglo system. Her response? They wanted to do this quickly and did not have time to translate the questionnaire into English. But a part 2 will likely happen and we may be included then. (So, it was easier to just exclude the whole community rather than allow the majority of us who can fill out a French questionnaire participate. Or to ask someone in the English community to help out and provide an unofficial translation until an official one could be validated by the University…)

In 2017, I went to a presentation by the Université TÉLUQ Canada Research Chair in Media Literacy and Human Rights, Normand Landry. He presented a meta-analysis he conducted on media education across every single program of study in the Quebec youth sector. His conclusion was that there was little to no mention of media education within the Quebec education system. My colleagues and I were a little confused because the English Language Arts program is based on media literacy. So we asked Normand Landry about it. He answered that he did not include the English programs in his meta-analysis because he assumed they were translations of the French language programs. (And no one on his team questioned the absence of the English system programs.) (So, essentially his results were flawed.)

In the Spring of 2017, I was working as an education consultant with the RECIT for Adult Education and learned that a group in my office was going to launch a redesigned website for the Adult Education community at the beginning of the next school year. But only the French site. The English version would follow at a later date. I expressed my concerns and the initial response was a frustration about the English community – that even when we are included, we aren’t happy. That even when we are included, we often decide to create our own resources anyways. But my boss was a good one. He has strong beliefs about education and is open to listening to other beliefs. And is open to change when change is needed. We had a series of conversations that came down to this: when communities are excluded in order to push up an agenda, you are saying that those communities do not matter in the grand scheme of things. When we are added on after the fact, we still realize that we weren’t important enough to include from the beginning. When we don’t see ourselves represented in major research studies or on educational councils or in educational resources, we get the message that we are not part of the community. And that is why we forge on and create our own resources.

As a result of our conversation, the site was launched in both languages at the same time. And both versions had their own official launch events within each community. There was a sense of equity across the two sectors.

The English and French systems are two parts of a whole. When we speak with each other, we can create a community based in equity that responds to all of our needs.

Essentially, we are not something to be added on once everything has been decided upon and developed. That is not inclusion, that is annexation. And that is how people in the English education community feel each time resources – from Ministerial course evaluations to teaching or professional development materials – are created months to years after the French ones are made available.

And each time we are excluded from research studies about education experiences in Quebec.

(And this is just along linguistic lines…)