I originally posted these quotes (see bottom of post) over a year ago. They resonate deeply within me. Love and affection can not be bartering tools. They just need to be. I believe they are conditions for learning, for real learning to happen. But what is real learning? It’s learning beyond the test. Learning beyond the classroom. It’s collaborating with others to move forward in whatever you might be working on – for students it can be learning about work ethic and motivation by spending extra time to make sure you are on the right track, to make sure you will be successful. For teachers it can be the same thing when we spend extra time collaborating with each other and with our students to make sure we are all successful.

It’s report card time. I have a love/hate relationship with these times of the year. Because I have some students who are going to fail this semester. At least, they are going to fail on paper. But these same students have made such amazing advances compared to where they have come from. Advances that have nothing to do with the number that just might crush them on that government mandated piece of paper that reports on content, not process called the report card.

I’m off to battle the numbers.
later.

“The children must get plenty of love and affection
whether they deserve it or not: they must be assured of the basic quota of
happy, recreational experiences whether they seem to have it coming or not.
In short, love and affection, as well as the granting of gratifying life
situations, cannot be made the bargaining tools of educational or even
therapeutic motivation, but must be kept tax-free as minimal parts of the
youngsters’ diet, irrespective of the problems of deservedness” (1952).

“Boredom will always remain the greatest enemy of school disciplines. If
we remember that children are bored, not only when they don’t happen to
be interested in the subject or when the teacher doesn’t make it
interesting, but also when certain working conditions are out of focus
with their basic needs, then we can realize what a great contributor to
discipline problems boredom really is. Research has shown that boredom
is closely related to frustration and that the effect of too much
frustration is invariably irritability, withdrawal, rebellious
opposition or aggressive rejection of the whole show.” (1966)

my previous post about facebook got me to thinking about other online venues where kids are commenting on their teachers. If you go to YouTube and search for teacher, angry teacher, mad teacher, you will find quite a few cell phone videos of teachers who are out of control. (Teacher Yelling at Student, Angry Teacher)

We can react by asking what cell phones are doing in classrooms. We can react with shock at the kids who are acting out. We can go on about how technology is taking over.

I react by saying that kids are bearing witness to us. We can no longer expect what goes on in our classrooms to stay there. That is the reality. I choose to accept the fact that the technology is there and to teach my students about how to use it responsibly.

I also choose not to yell at my students or to treat them in an unacceptable way. As a teacher I know that I am one of the biggest models in a students life. Everything I do is under scrutiny. When they see me angry and yelling they see a teacher out of control and no way do I want to model that kind of behaviour!

Maybe this technology is a flashing light, reminding teachers to be accountable for the way they treat their students. More importantly, reminding schools to provide support for teachers so they don’t get to the point of not knowing what else to do but yell, scream, belittle, humiliate.

Some argue that teachers are at times being provoked by students for the sole purpose of making these videos. Regardless – the teacher is the adult. At what point would I allow myself to get so provoked by events or behaviour that I would act in this way?

Over the past couple of weeks I have been hearing and reading about stories to do with facebook in (and out of) schools.

At schools in Quebec and Ontario, students are being suspended for things that they are posting about their teachers and principals on facebook. These are the same kinds of things that students talk about to each other all the time – but when they put it in writing, in a public forum, it becomes a whole different story.

The thing is, kids don’t realize how public the internet is. Anyone can read what you write in a group on facebook, and when what you write is damaging to the school community I think the school has a responsibility to address it.

However, I don’t think that the issue is being addressed in the right manner. At a school in Ontario, students were suspended from a class trip because of comments they made on facebook while they were at home. According to one of the fathers, the parents and students were informed of this decision without any discussion. (Father: school too harsh on son for online remarks, ctv.ca)

Schools and families need to work together. Arbitrarily punishing someone doesn’t make sense – and doesn’t work. We need to be teaching kids about the realities of online social networks like facebook, and we need to be helping parents to do the same.

classroom management taken a step (or 2) too far Image: Tantrum by Chirag Rathod made available on flickr via a creative commons license.

A school called the police on a child in kindergarten who was having a temper tantrum. The child was arrested and a police report was written. I’d love to know the rationale behind that, or perhaps it is good I don’t. It is an example of how the end can never justify the means when it comes to teaching children. Regardless of the rationale, this little child – who was obviously already upset – spent the day at a police station, was handcuffed!

This again points to our need as a system of education to provide teachers and schools with the support they need to deal with difficult situations. And if the support isn’t there – we need to create it. 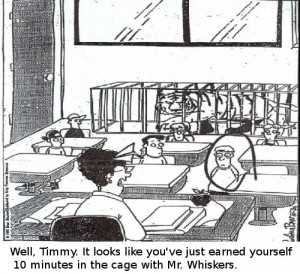