dreams and connections to the spirit 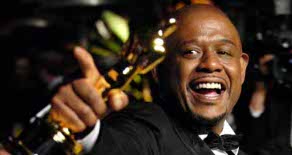 When I was a kid, the only way that I saw movies was from
the backseat of my family’s car. At the drive-in. And, it wasn’t my
reality to think I would be acting in movies, so receiving this honor
tonight tells me that it’s possible. It is possible for a kid from east
Texas, raised in South Central L.A. in Carson, who believes in his
dreams, commits himself to them with his heart, to touch them, and to
have them happen.

Because when I first started acting, it was because of my
desire to connect to everyone. To that thing inside each of us. That
light that I believe exists in all of us. Because acting for me is
about believing in that connection and it’s a connection so strong,
it’s a connection so deep, that we feel it. And through our combined
belief, we can create a new reality. (found on firstshowing.net)

I thought that Forest Whitaker’s speech was powerful. In the first paragraph he spoke of the power of dreams and goals to bring us to our best future. And I think that his second paragraph shows how it is possible. For him it is through acting. For me, it is through teaching that I find the connection to the human spirit – Forest’s light that exists in all of us.

Teaching for me has to do with creating a context for hope and potential, both qualities that drive the human spirit.

Hmmm…do we really want this to happen? There has to be another way!

Image: Photo of Barack Obama from my.barackobama.com
Teaching Our Kids in a 21st Century Economy. A speech by Senator Barack Obama, in October 2005 at the Center for American Progress (Go here for a text version)

He talks about Jonathan Kozol‘s new book – Shame of a Nation. It seems to me that Mr. Kozol has been writing of the same themes for many years now. His books, Death at an Early Age and Amazing Grace, were among the factors that brought me to a career in education.

I am glad that Senator Obama, who, since yesterday, is now a presidential nominee, has advocated for equality and progression in education. I hope he still is. Because I think that he is someone who is going to have great influence in that country to the South of us, where 1 in 4 8th graders never finish high school (statistic taken from speech).

He talks of transforming American educational culture. A beautiful dream.

He says, “the single most important factor in determining their achievement today is not the colour of their skin, or who their parents are but…who their teacher is.”

“If we are going to give our kids a chance, it is time to start giving our teachers a chance”

He offers ways of doing this. I am going to listen more later because I have to go! I will give my opinion on that later on today.

liberating, educating – moving away from our deepest fear

Our Deepest Fear
by Marianne Williamson from A Return To Love: Reflections on the Principles of A Course in Miracles

“Our deepest fear is not that we are inadequate. Our deepest fear is that we are powerful beyond measure. It is our light, not our darkness that most frightens us. We ask ourselves, Who am I to be brilliant, gorgeous, talented, fabulous? Actually, who are you not to be? You are a child of God. Your playing small does not serve the world. There is nothing enlightened about shrinking so that other people won’t feel insecure around you. We are all meant to shine, as children do. We were born to make manifest the glory of God that is within us. It’s not just in some of us; it’s in everyone. And as we let our own light shine, we unconsciously give other people permission to do the same. As we are liberated from our own fear, our presence automatically liberates others.”

When it comes down to it, I think my job as an educator is to make sure that as many children as possible can aspire to live within the spirit of this quote.