This morning I read a thoughtful post about what ADD may or may not be. Despite the timeliness and depth of thought present in the article, I was stricken by one paragraph about the perils of classrooms on our children. How our young children today, so rife with creative potential, are doomed to a future of diagnosis and boredom because they will be subjected to school.

I was not only stricken but insulted.

Does all of the work that I and many of my colleagues have done over the past years have no bearing on the future of education? Do all of those teachers out there in schools all over the world who care about their children not count?

I feel we need to get beyond the system is broken kind of thinking and focus on what is working. We see what we look for and if we keep focusing on a broken system we will only succeed in creating more broken system.

Instead of creating a doomsday effect by telling ominous stories of the proliferation of ‘traditional’ classrooms that stifle creativity and connectivity, I prefer to point towards learning that does the opposite, learning that works and educators who ‘get it’.

You get the point. There are good educators who foster good learning in good classrooms in good schools. I keep this in mind as I work towards hope for the future within (and without) the walls of my own school.

I woke up at 2 am, couldn’t fall back asleep, so began to watch Invictus, the story of Nelson Mandela’s call to Rugby to begin healing South Africa in 1995. Watch the film for the final game. I think it’s one of the best EVER. Even though I knew the outcome, I was on the edge of my seat, cheering with the crowd, admittedly with tears on my cheeks.

That game happened because of Mandela’s inherent leadership. He knew what was needed to inspire his country – his family, as he called its citizens – to begin to become a nation undivided and he did not let anyone get in the way of that vision, no matter how unpopular it was.

These are the words that inspired his powerful vision, throughout his 27 years in prison and his presidency:

Out of the night that covers me,
Black as the Pit from pole to pole,
I thank whatever gods may be
For my unconquerable soul.

In the fell clutch of circumstance
I have not winced nor cried aloud.
Under the bludgeonings of chance
My head is bloody, but unbowed.

Beyond this place of wrath and tears
Looms but the Horror of the shade,
And yet the menace of the years
Finds, and shall find, me unafraid.

It matters not how strait the gate,
How charged with punishments the scroll,
I am the master of my fate:
I am the captain of my soul.

Those final two lines, a reminder that no matter what we control how we are in the world.

Passion exists inside me, not inside a job

This blog post has been in the works for a couple of weeks now and was coaxed out by Dan Callahan’s post One for the Record Books over at Geek.Teacher. His post reflects on the mixed feelings he has around changing schools, changing positions.

My own recent job change has had me thinking along the same lines.

I’ll admit to being very conflicted that I’m abandoning a lot of the core elements that have defined my first eight years as an educator. My new position is going to be so drastically different from what I’ve been doing on so many different levels, and it will differ in a lot of ways from what I set out to do when I got my first job.

In my darker moments, I’ll admit, it feels like I’m selling out. While I know that my new position will have its own challenges, I have to admit that those areas highlighted above feel important, and it feels like I’m abandoning them.

As many of you know, I loved my last job. It was infused with ideals of teaching I believe in strongly – working with students who have been marginalized much of their lives and showing them it doesn’t have to always be that way, putting the student before curriculum, the necessity of relationship, the heightened sense of making a difference in students’ lives.

I used to teach students in grades 10 and 11 at an alternative program, kids who were at risk to not graduate high school but were identified as bright, needing a different environment. Close to half of my students were Native students (Mohawk from Kahnawake). I now teach French in an elementary school in a rural area of Eastern Ontario and at first I, like Dan, thought that I was abandoning those ideals I held close by leaving that job.

Those feelings are also entangled with the sense of real abandonment I fear I’ve left my students. You see, I took the new position with 4 days of teaching plus an exam period left in the year at the old school. The decision wasn’t easy but necessary to gain experience in the Ontario school system. I was able to take it because of the tight teaching team that exists in that program. I didn’t leave my students to flap in the wind with a random substitute teacher. I left them with some of the most caring people I know. That is another fear I have, attached to another one of my ideals, that I have left a teaching team that embodies collaboration, caring, and raising the bar for ourselves and our students.

So, while I was excited to be starting something new and to be on the track to better work/life balance by working at a school in my area of the world, I was also thinking about everything I just wrote about. Not to mention the fact that all of this was happening in June, not usually my most energetic month!

Soon into my new job, however, I began to make connections with my colleagues and with my students. The first time a student came to me on the playground, “Madame Tracy, please help,” I thought, “All is good”. I realized that I am still excited about helping kids to learn, though in different ways. And I remembered, it is not my job that defines me but me that defines my job.

I find inspiration when I need it and at the end of my 2nd week at the new school was intrigued by a tweet in my twitter feed from Elona Hartjes: 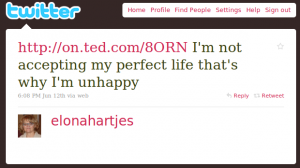 The link led to a talk on TED by Srikumar Rao called Plug into your hard-wired happiness. The line, “passion exists inside you, not inside a job,” seemed louder than the other lines that were spoken in the video. And I realize that everything is going to be ok because I love and am passionate about working with kids and teachers, about being part of a caring community dedicated to the children within it, about creating hope for the future within community. My job helps me to live out my passions but it isn’t the sum of them.

“My personal belief is that students are a lot more competent than we ever give them credit for, and sometimes all we need is to do is get out of their way.”

Ok, those are actually Paula White’s words but we share the same belief.

I have always thought that students will rise to the bar we place for them. Last week we worked with all of our students around the issue of bullying and its mirror, being thoughtful, respectful, nice to each other. Later that same day I saw one of my students approach another, someone she never usually gives the time of day, “I just want to say hi. What’s up?” While we were filing out of an assembly (the assembly itself was pretty rocking – a presentation by Music With Meaning). I know that little outreach meant the world to the student on the receiving end. I was touched to no end.

We are explicitly expecting kindness. They are rising to those expectations when we step out of their way and give them the space to do so.

Who tells you how to teach?

This post was inspired by this passage from Teachers Should be Seen and not Heard by Anthony Mullen in EdWeek, Jan. 7, 2010.

“What do you think?” the senator asked….

…”I’m thinking about the current health care debate, “I said. “And I am wondering if I will be asked to sit on a national committee charged with the task of creating a core curriculum of medical procedures to be used in hospital emergency rooms.”

The strange little man cocks his head and, suddenly, the fly on the wall has everyone’s attention.

In Quebec it is the provincial government’s Ministry of Education, Leisure, and Sports (MELS) who tells us how to teach, via the consultants who work for the Quebec English Schools Network (LEARN) via the consultants who work for our school boards, via our principals, via our department heads. At least that is how it is supposed to go, in the government’s perfect world, I guess.

I, more often than not, go straight to the source. I read my curriculum, The Quebec Education Program (QEP aka ‘The Brick’), which offers philosophy, nothing tangible, then I create the tangible – the daily activities, from data-collection to project to evaluation and back again. Sometimes I do so on my own, sometimes with other teachers. I definitely spend a lot of time doing my own research into how/what/why to teach the students in my care. Some of what I use has been provided by other teachers who do the same. Some of it I found on my own, rarely via consultants though it does happen at times. Whatever it is I do my first and foremost truth is to my students, then I am true to the curriculum.

There are consultants available to me. Why don’t I use them? I consulted for a year. I had to get back into the classroom, as I often say, because I missed the daily energy of contact with students. But there was more to my decision to leave consulting than that. I felt that I was losing my credibility as a teacher. Who was I to consult with teachers on how to deal with the kids in their classrooms when I was no longer in the classroom? The nature of the students I teach changes every year. The further I was away from the classroom the less right I felt about consulting on the subject.

Does this mean there is no room for the consultant? No. But we need to look at how consulting happens. Too often consultants have never been teachers. They have never had to negotiate the many layers of teaching in a classroom – from pedagogy, to behaviour, to technology, to management, to learning disabilities, to multiple subject matters, to headaches, sore stomachs, teen girls at their time of the month, the farts, the dress code, the Internet not working, the why do I have to sit there?s, the exam stress, the I don’t know how to read but I think no one knows so I will continue to be a pain in the ass so no one ever finds outs. I’ll stop there.

What if teachers consulted with each other? If part of our workload was about learning and sharing about something specific, either in content or in process – say history or using laptops in the classroom? Something that relates to what we mainly teach. How much more satisfying and meaningful would my job be if I could teach a bit less and have time to research and share with my colleagues?