Learning a second language requires as much practice time with the language as possible. For second language learners, it can be truly overwhelming to try to squeeze all of your language learning into the few hours allotted for it during class-time. Now you (or your students :) can expand your learning to whenever it is convenient to you by subscribing to the YouTube Channel, French Help…Whenever!

For the better part of a year I have been involved with a project spearheaded by Marc-Andre Lalande, Pedagogical Consultant with the RECIT Provincial Service for FGA (Huh? Basically he is the consultant for technology and pedagogical renewal in the adult education sector of Quebec’s English public education system). I am incredibly fortunate to be able to collaborate with awesome educators from around Quebec as we create learning capsules for French second language students in adult education (or anyone else who wants to use them).

One of the best things about the project is that, as we are working on video capsules to help our adult learners, we are learning so much ourselves! We are stretching our knowledge about second language learning and in so doing we will be better equipped to help our students succeed.

Our first video capsule – Frenchlation by Karine Bellefeuille-Ward and Véronique Bernard – is now live and new videos will be available on a regular basis, so stay tuned!

I am very happy to see this project come to life!

Yesterday, a student asked me this question: “Are Jews and white people the same thing?”

I started with a no, because there are black Jews, there are brown Jews. But there are a lot of white Jews.

“So, is it just their religion that makes them different from white people?”

I thought…and said, maybe. A lot of people don’t like what is different from them. There is actually a word for when people really don’t like Jews, it’s called Anti-Semitism.

He summed up our conversation with, “Racism sucks”.

And then this morning, I read this article in the New York Times:
Swastikas, Slurs and Torment in Town’s Schools: Pine Bush, N.Y., School District Faces Accusations of Anti-Semitism

“He recalled that around the time of the Jewish holidays, teachers would ask if there were Jewish students in the class. “I learned very, very quickly not to raise my hand,” he said.”

—
I have a vivid memory from my own childhood of a friend, in a burst of anger, telling me that us dirty Jews were all alike. We must have been 9 or 10.

Just as vividly, I remember glimpses of indigo numbers sliding back and forth under my great-aunt’s sleeve as she raised her wine glass at Passover each year.
—

Now, we do the Passover seder in our family, and we gather for Rosh Hashanah and Chanukah, and we respect Yom Kipur, but we don’t go to synagogue, we aren’t kosher, and we don’t focus on Israel. But we are definitely Jewish.

As a young child, I remember asking my mother a similar question. A question about what makes us Jewish. Her response had something to do with how Hitler wouldn’t have cared how religious we were. We’d still have gone to the camps.

So, were Jews involved in the atrocities that have rained down on Native peoples since (in this part of the world) roughly the 16th century? (Because I think that is where that question came from)

But this question has me thinking about identity, hate, care, history, and my students.
They still keep me thinking and questioning.

Once again…it’s not about technology

I saw this image floating around twitter this morning and it pretty much sums up what I think about technology and learning. 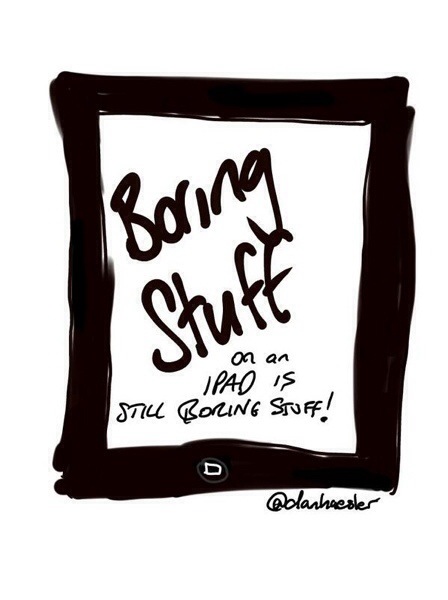 We don’t want to use technology for the sake of having a fancy, shiny tool to bedazzle our audience into learning. Like THAT’S going to work. An iPad is not going to instantly transform a lesson that doesn’t connect with our learners into one that does. Really, it won’t. If we try to do that, we’ll probably end up supporting the notion that it just adds another distraction to our learners because it will offer them another way to divert their attention from the same thing they weren’t connecting with in the first place.

So, allow students to use an iPad if it makes sense. But not to dress up an old lesson.

The why or when to use it is really contextual. Creating, connecting, practicing, researching…these are all good reasons to want your learners to have access to an iPad. But the real questions lie around what you are expecting your learners to create, connect with, practice, and research. Does it have meaning for them?

And, ultimately, do you?